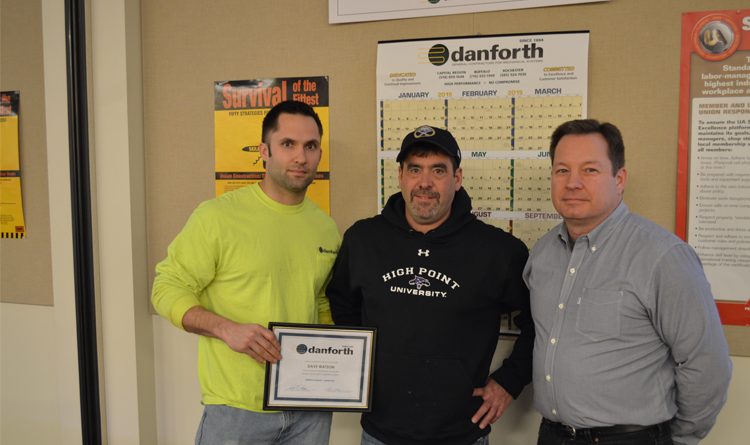 Buffalo Steamfitter Apprentice, Dave Watson, has been awarded the Apprentice Highlight for the month of February. Dave is a 3rd year apprentice who has gained all of his on the job experience with Danforth. Dave has been on many different job sites around the Buffalo area in his young career.

Dave was recognized this month because he possesses the ambition to improve his trade each day. He is always willing to stay late at school to work on improving his welding and is eager to learn. Dave’s commitment to continual improvement has set a positive example for his peers and anyone who works a job with him.

Dave began his apprenticeship with Danforth at Erie County Medical Center working on the chiller and cooling tower installation. He then moved onto General Motors and Covanta, working on the steam lines. Dave has also worked at the Power Authority before landing at his current job site at DuPont. He is currently working on a maintenance agreement repairing anything from ¼” tubing to 12”-14” sodium piping. When asked what his favorite part of working with the Danforth Team he said, “Everyday is a learning experience because the journeymen and foreman take the time to stop you and teach you the right way instead of just letting you go.” Dave flourishes in this learning environment due to his drive and passion for the trade.

We asked Dave how he stays safe on his jobs, he responded by saying, “My military background taught me how to look ahead and be aware of my surroundings. You have to not only be aware of what you are doing, but also what everyone else on the job site is doing.”

Dave hopes to one day progress within the union and manage projects.