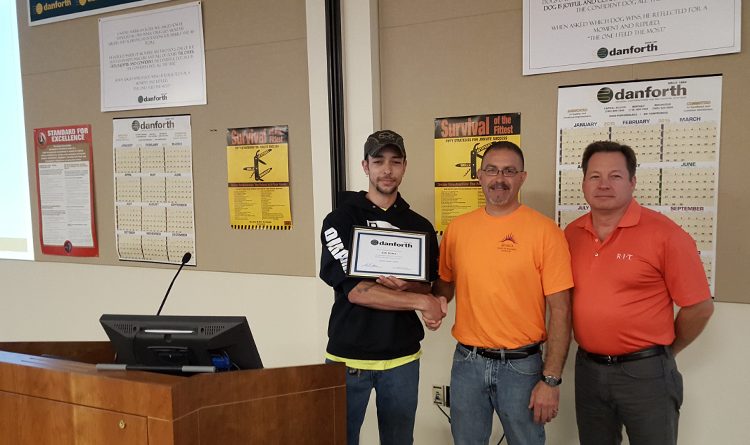 This month’s Apprentice Highlight is 5th year sheet metal apprentice, Ken Roma. Ken has spent time in the Buffalo Fabrication Facility and on numerous jobsites over the last 5 years. Ken, a member of Local 71, began his career in October of 2010 with Danforth. He has made a positive impact in our shops and in the field ever since. Ken has taken advantage of the mentorship he has developed with several journeymen and foremen. He has learned many things including measuring, layouts, duct installation and fabrication. His supervisors noted that he is always eager to learn and assumes a leadership role among the apprentices.

Currently, Ken is working on the HARBORCENTER hotel project. He has been on this project for over 15 months and is one of the few Danforth tradesmen left on site. Over the 15 months, Ken has developed a bond with his fellow workers and supervisors saying, “I’ve gotten to know the guys well and it really is like a family environment. We even hang out after work, and I’ve learned a ton during the project.” Before HARBORCENTER, Ken spent time working on projects for the University at Buffalo Educational Opportunity Center, ECMC, Williamsville Schools, Baptist Manor and Lyndonville CSD. Ken also spent 1 ½ years in our Sheet Metal Fabrication Facility located in Tonawanda, New York.

Being on a construction site can be dangerous, but Ken has developed several different tactics to coming home each night. He said, “When I’m on the site, I look ahead and plan for the day, it makes it easier to anticipate things throughout the day instead of running into surprises.” He also said, “You’ve got to think about yourself but you’ve also got to think about your crew and look out for them too. We all have each other’s backs try to make everything we do as safe for ourselves so we can go home to our families.”

Ken couldn’t say enough about his opportunity to learn from his experienced mentors. He commented, “At work, the guys aren’t shy about giving praise or giving a little constructive criticism. That tells me how I’m doing and motivates me to be better.” The future looks bright for Ken as he is already displaying strong leadership characteristics as an apprentice. His goal is to become a sheet metal foreman so he can run projects and be a mentor to future generations.