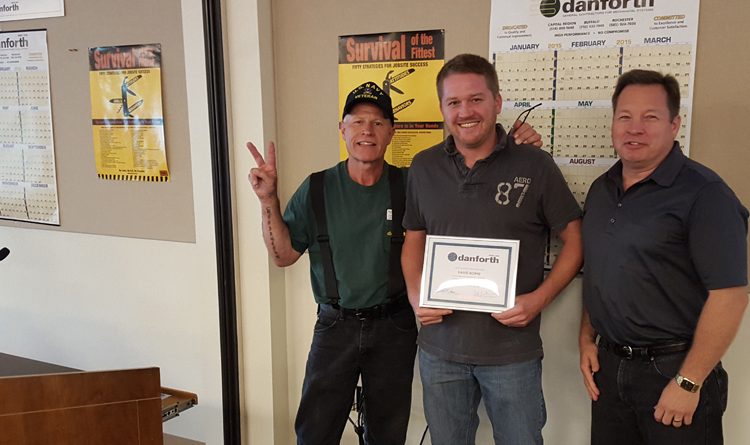 David Borne of Buffalo, NY has been awarded the Apprentice Highlight for July 2015. David is in the 5th year of his apprenticeship as a pipefitter. He has gained experience and developed his skills in the field and in the fabrication shop. Danforth has had the privilege of working with David for a little over a year and a half and has made a positive impact on every project that he has worked on.

While working with Danforth, David has learned and applied many skills in his trade including demolition, layouts, assembly and installation of piping systems. He has shown dedication in both the classroom and on the job to better himself and prepare for a long career at Danforth. Currently, David is working in Downtown Buffalo on the Mahoney Office Building boiler project. David is working with his field mentors and project management to demolish the existing boiler and associated piping. David commented on the project saying, “It’s a lot of hard work, some days we change shirts 4 times because of the sweat, but it’s fun and I learn something new every day.” The schedule for the project is aggressive but attainable according to David.

Over his year and a half with Danforth, David has spent three months in the Tonawanda Fabrication Shop doing prefabrication for jobs ranging from small replacements to large, complex work for GlobalFoundries. In the field, David has worked on the Batavia Downs remodel, Arcade Middle School, the Olin shutdown and Fredonia.

David puts an emphasis on safety while on the job. He follows Danforth’s safety protocol and puts extra effort into cleaning up his work area and organizing materials and tools for his work. David aspires to someday manage piping projects and pass down his knowledge to future apprentices.