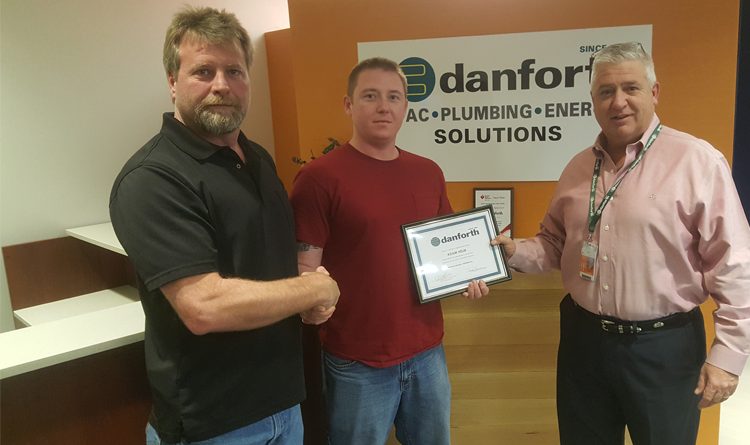 After serving several years in the military, Adam Helm was brought into the Glens Falls Local #773 and started with Danforth as a 1st year Apprentice upon our arrival at GlobalFoundries.

His first job was an assignment working in logistics and material handling. In this position, Adam learned the different types of materials and tools that were used in the trade, and how to effectively coordinate deliveries from multiple shops and efficiently receive vendor deliveries. It didn’t take him long to understand the benefits of a “timely and accurate delivery” in order to keep the field moving. His hard work and dedication became apparent among the foremen and he rapidly became one of the most sought after employees by Danforth’s supervisors.

After several months, he was transferred to the field to continue his education on Plumbing and Mechanical installations, shop and fabrication drawing interpretations, as well as gaining rigging experience with some of Danforth’s finest in the Capital Region.

During Adam’s 3rd year as an Apprentice, Danforth was awarded the HPM contract which included high purity piping systems. The project’s General Foreman insisted that Adam was to be transferred into his crew immediately and Adam became the first employee on Danforth’s new contract. Mike sent Adam to the field to assist Danforth’s laser scanning subcontractor and was given the opportunity to configure the layout a large portion of the job. Adam was then sent to Danforth’s Capital Region warehouse to aid in building a temporary cleanroom, where he would spend the next several months fabricating our high purity piping systems. Back in the field, he was teamed up with an experienced orbital welder and again, it didn’t take long for him to take over.

Adam has proven to be one of the most versatile and well rounded Apprentices that has come through the Capital Region. Adam and a small group of his peers will soon be introduced to our internal Introductory Foreman Training and Development program.