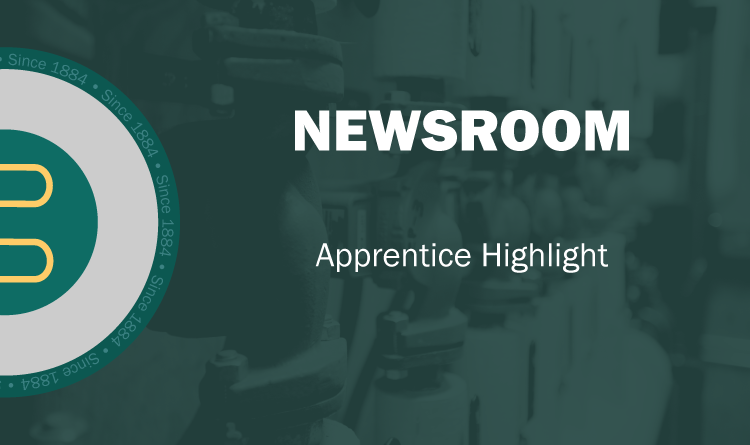 Sean McDonough has been recognized by his supervisors as this month’s Apprentice Highlight. Sean has been working with Danforth for over a year and a half and is currently working at the Olin Chlor Alkali chemical manufacturing plant located in Niagara Falls, New York. The Niagara Falls chemical plant produces hundreds of thousands of tons of industrial bleach and on-purpose hydrochloric acid, in addition to chlor alkali annually.

Sean is a fifth year apprentice out of the UA Plumbers and Steamfitters Local 22. He is a field steamfitter and works with stainless steel and Teflon piping used to transport chemicals such as chlorine and bleach. While Sean and Team are working on these piping systems, they have to be mindful of added safety protocols not found on typical jobsites. Sean commented; “The biggest challenge about working at the Olin Plant is the potential chemical hazards that are involved this type of work.” When working with open pipe and chlorine gas, workers must wear special suits that contain respirators to prevent the inhalation of dangerous fumes.

Before working in Niagara Falls, Sean was assigned to work on the state-of-the-art Riverbend high-tech manufacturing plant. Sean worked on the complex piping systems in the over 1.2 million square foot facility. The high-tech manufacturing plant is the largest of its kind in the Western Hemisphere. Danforth made headlines during the project when transporting 44 air handling unit sections onto the roof using a Sikorsky S-64 transport helicopter.

Sean has been a part of several field teams while at Danforth. He said, “Every Danforth site I’ve been on has been the same. Everybody is always looking out for each other’s safety and is happy to lend a helping hand to get the job done right the first time.” The family like atmosphere makes it an easy place to work for Sean.
Sean was recognized by his supervisors as always being on time and respecting his peers. His supervisors describe Sean as “someone who does not accept ‘average’, and someone who never has to be asked twice.” Sean always maintains a positive attitude, even when he and his peers are required to wear the uncomfortable “moon suits” when dealing with dangerous chemicals at the chemical plant. Sean wants to continue working and maybe become a leader in his field in the future, and would like to continue working for Danforth.

About the Apprentice Highlight

Since our inception as a company in 1884, our strength has been our skilled tradesmen in the field and fabrication shops. Our company has grown stronger from generation to generation for over 130 years. This is due in large part to our comprehensive mentoring programs.
We believe in preparing our employees for their future through mentorship. Our apprentices are the future of our labor force and will become the leaders on our jobsites and in our fabrication shops. Our comprehensive hands-on training program gives our apprentices the opportunity to learn from our skilled journeymen and foremen on keynote projects across New York State.

We are proud of the Union tradesmen that we employ across New York State and beyond. These fine young men and women are at the core of our success and will continue to be in the future. Our Apprentice Highlight program is something that is important to identifying and growing the leaders of the future.